Researchers from Daegu Gyeongbuk Institute of Science and Technology have developed an innovative method that allows them to visualize up to tens of different proteins simultaneously in the same cell. This technology could help scientists elucidate the complex protein interactions involved in degenerative diseases such as Alzheimer’s, deepening our understanding of their mechanisms and allowing for early detection and treatment. 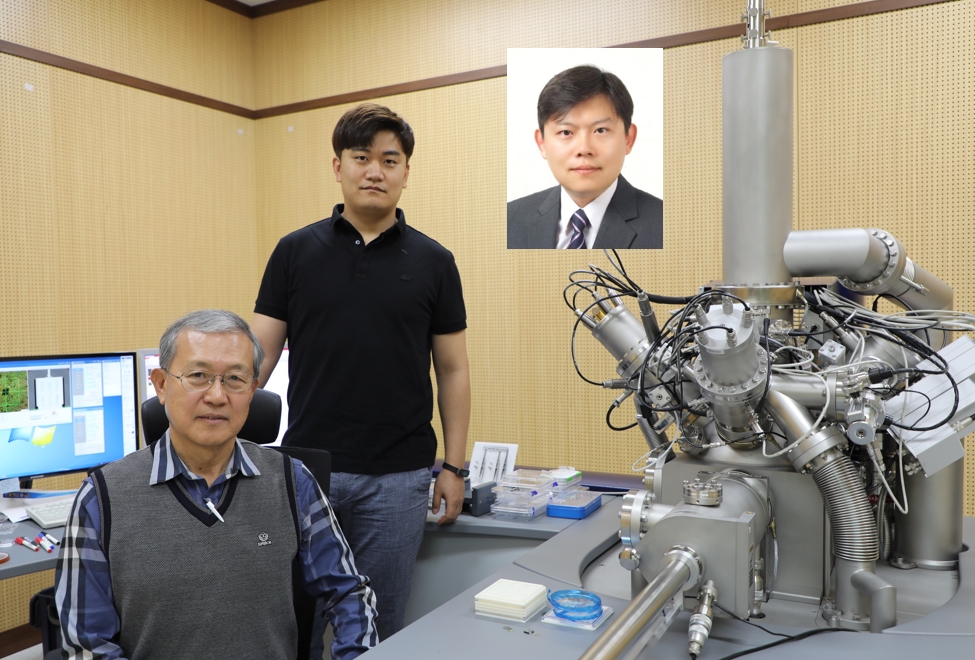 From left to right, Professor Dae Won Moon, Mr. Young-Ho Park., and Professor Su-Il In. Beside them is a secondary-ion mass spectrometer, a device used in the semiconductor industry that, as the researchers demonstrate, holds tremendous potential in biomedical imaging.

Degenerative diseases such as Alzheimer’s often involve complex interactions between multiple proteins and other biomolecules. Understanding these interactions using existing imaging technologies is difficult because of insufficient resolution and the impossibility of simultaneously detecting many different proteins.

In a recent interdisciplinary study, a research team led by Professors Dae Won Moon and Su-Il In from Daegu Gyeongbuk Institute of Science and Technology developed an innovative approach that extends the applications of the technique ‘secondary-ion mass spectrometry’ from its original purpose in the semiconductor industry to the biomedical imaging field. Secondary-ion mass spectrometry allows one to analyze the composition of surfaces and offers very high resolution. Using this technology to image proteins was impossible—until now.

In this novel approach, different metal oxide nanoparticles are individually attached to antibodies that bind to specific target proteins. The mass spectrometer can easily detect these nanoparticles even at low irradiation doses, which leaves the cell tissue intact and allows for multiple analyses on the same cells. Through this approach, it is theoretically possible to analyze tens of proteins simultaneously. This vastly surpasses existing fluorescence-based approaches, which allow for the simultaneous imaging of around four proteins.

The researchers used their method to compare the distribution of proteins in the brain tissue of mice that were either healthy or had Alzheimer’s. They showed that valuable insight could be gained from observing multiplex protein distributions in the ‘hippocampus’ section of the brain, and demonstrated how these differed between healthy and diseased mice.

Achieving these results required combining knowledge from many disciplines. Prof. Moon remarks, “For me, a special highlight of this work is the collaboration of many researchers from different backgrounds, such as chemists, nano-particle experts, medical doctors, and biologists. It was not easy and took a long time, but it was exciting to see the progress. We can now visualize multiple proteins on cell membranes with a spatial resolution of 300 nanometers.” He expects this new imaging approach to become an important tool to deepen our understanding on degenerative diseases. “The proposed technique could be used to figure out the early stages of Alzheimer’s disease, in turn allowing for early detection and treatment,” he states, hopefully.