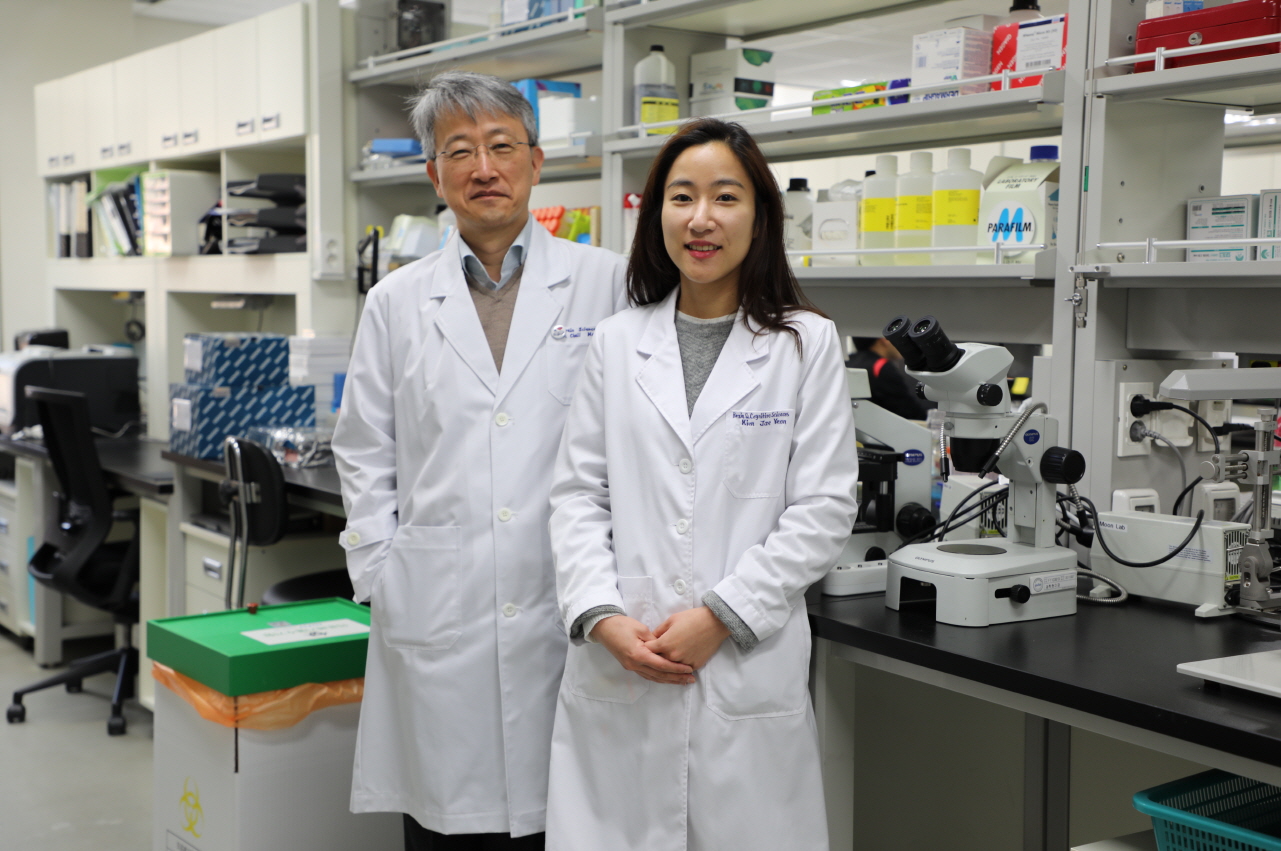 <Department of Brain and Cognitive Sciences Professor Cheil Moon (left) and the first author Jae Yeon Kim, a Ph.D. student (right) ⓒDGIST>
DGIST identified causes of hypersensitivity accompanied by neurodevelopmental disorder such as autism-spectrum disorder (ASD). This is expected to make huge contributions to the early diagnosis of sensory-defective symptom brought with neurodevelopmental disorder and cancer as well as the improvement of anti-cancer drug side effects.

DGIST announced that the Department of Brain and Cognitive Sciences found the important mechanism of ‘Abl1’ gene, which is involved in the early developmental stage of inhibitory neuron2 for forming normal sensory circuits.

Before formation of cognitive or verbal neural circuits in brain development, sensory circuits are developed explosively for one year after birth. An ASD with cognitive and sensory defects is caused if inhibitory neural circuit is not formed properly due to genetic and environmental factors during the brain development. While studies on ASD treatment have focused on the abnormal development of inhibitory neurons related to cognitive disorder, no sufficient research has been made on the specific causes and mechanisms of sensory defects that occur first.

The DGIST research team discovered for the first time that Abl1 gene is expressed and activated explosively during the early development of inhibitory neurons in the mouse olfactory bulb. They also learned that if the expression or activation of Abl1 is inhibited using lenti-virus2, inhibitory neurons cannot reach their cell layers accurately due to structural defects.

A candidate gene of ASD, Abl1 is also well-known to cause cancer. If Chronic Myelogenous Leukemia (CML) patients aged 2-9 with active brain development intake target anti-cancer drug Gleevec (Imatinib), an Abl1 deactivator, more than 60% of them show sensory related-side effects such as olfactory hallucination. Based on this, the research team confirmed that the inhibition of Abl1 expression and activation greatly increased the olfactory sensitivity of mouse as the side effect of Gleevec intake.

The research team also discovered that using proteomics , Abl1 temporarily phosphorylated doublecortin (Dcx), a cytoskeletal protein that plays a crucial role in the structural development of brain. This proposed that Abl1 regulates the dynamic of microtubule with a new signal transmission system between Abl1 and Dcx. 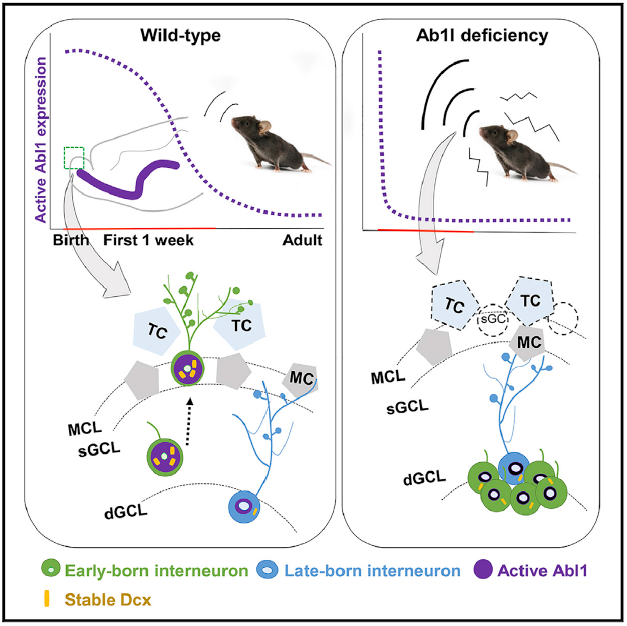 < A mimetic diagram on the roles of ABl1 in the early development of inhibitory neurons in olfactory bulb. ⓒDGIST>

Professor Cheil Moon in the Department of Brain and Cognitive Sciences at DGIST said “We found a very important clue to understand the mechanism of hypersensitivity appearing in neurodevelopmental disorder or cancer disease, which are yet to be known clearly. We hope to see follow-up research to overcome other sensory disorders based on our research.”

This research was participated by Jae Yeon Kim, a Ph.D. student in the Department of Brain and Cognitive Sciences at DGIST as the first author, and its findings were published on the online version of ‘Cell Report,’ a world-renowned international journal on the 7th. This research was carried out with the support of “Bio and Medical Technology Development Project” by the National Research Foundation of Korea as well as “Hub-Spoke based Convergence Brain Research Project” by the Korea Institute of Brain Science.

1  Inhibitory neuron: A type of nerve cell that consists the brain and spinal cord as well as regulates stimulation and excitement between sensory and motility neurons.
2  Lenti-virus: A type of RNA Retrovirus used to express or inhibit the target gene to research in all cells or tissues as a vector.
3  Proteomics: An analysis technique to identify the defect functions of genes or proteins in proteome, which is formed by genetic order, and to track diseases.