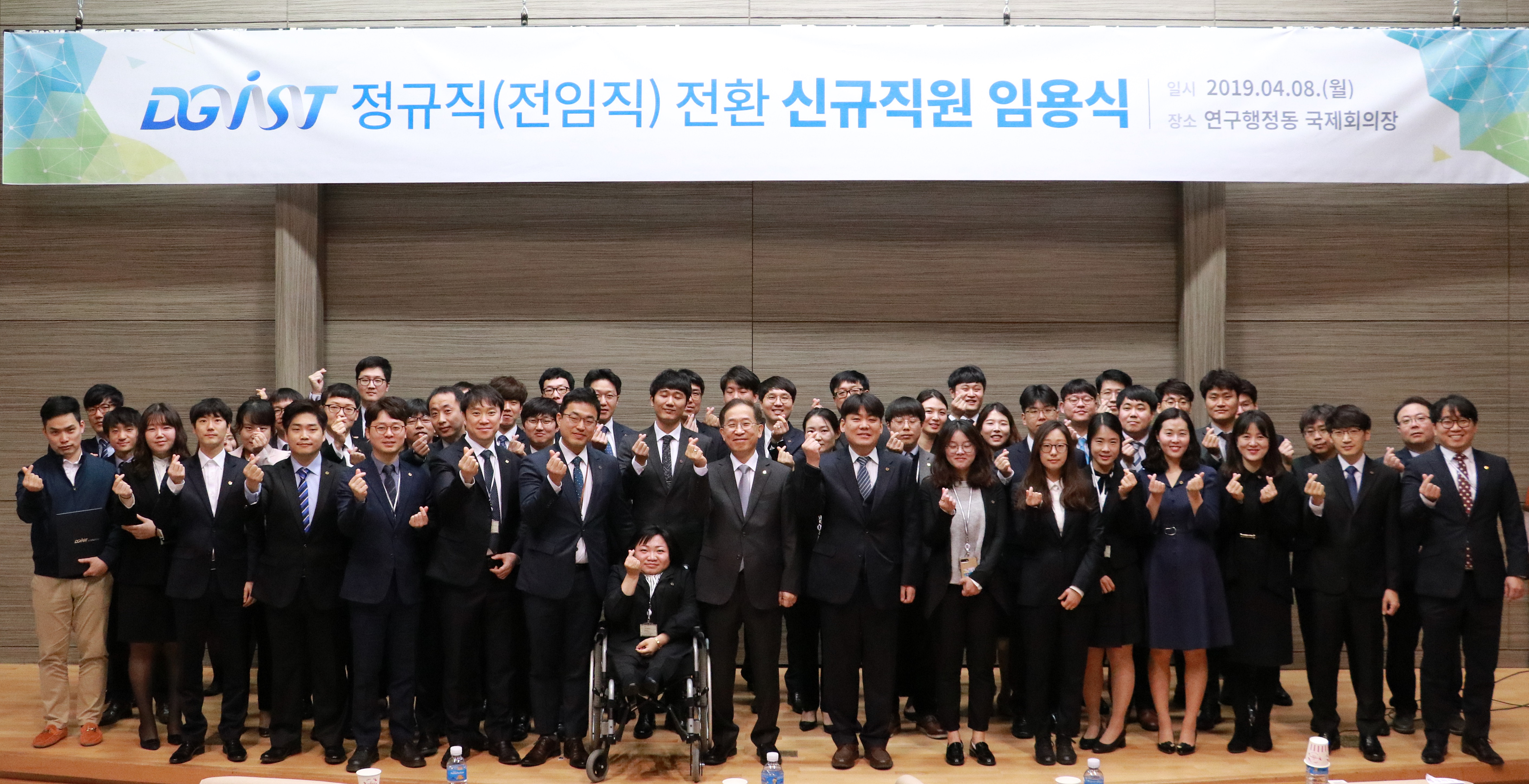 ▲52 researchers and 8 administrative/technical workers were newly appointed into regular jobs in the Regular Job Conversion Ceremony held in DGIST International Conference Hall at 10:30am on Monday, April 8.

DGIST (President Young Kuk) announced that it held a new appointment ceremony for conversion of non-regular research and administrative/technical jobs to regular positions in the International Conference Hall of the Research Administration Building at 10:30am on Monday, April 8.

DGIST organized the Regular Job Conversion Deliberation Committee (hereinafter CDC) that consisted of 8 outside members and 8 internal members, according to the Guidelines for the Conversion of Non-regular Workers into Regular positions in the public sector. The committee identified the size of conversion by analyzing the current status of non-regular jobs for the past year and half, and deliberate and decided on the type of jobs to convert and recruitment process by collecting the practical opinions of stakeholders.

As a result, DGIST newly appointed and converted 92 out of 100 candidates for non-regular administrative and technical jobs into regular positions on January 9, and completed the appointment by recruiting the remaining 8 workers through stage 2 open recruitment process.

52 out of 54 workers were also appointed for the research jobs, whose conversion was delayed compared to administrative and technical jobs, through stage 1 competitive recruitment process as the deliberation committee confirmed the detailed conversion plan. Beforehand, DGIST had a dispute with the labor union of non-regular researchers regarding the size and method of converting non-regular researchers into regular positions, and successfully solved the conflict through the regular, full-time conversion this time.

Senior Researcher Bongseok Kim who was appointed this time said “There have been many difficulties in performing my research because the conversion process was delayed more than expected, but I am happy to be able to work on my research in a stable environment from now on and am very appreciative of DGIST staff and faculty members who have worked very hard for us. I will do my best to become a researcher who contributes to the regional and national development.”

President Young Kuk of DGIST stated “To include many members, we finally completed the conversion of non-regular research and administrative/technical jobs into regular positions through a fair process for a long time. We are especially happy to have a successful conversion of non-regular researchers into regular positions, and we will do our best to make DGIST become one of the world’s best research institutions in the world beyond Korea.”