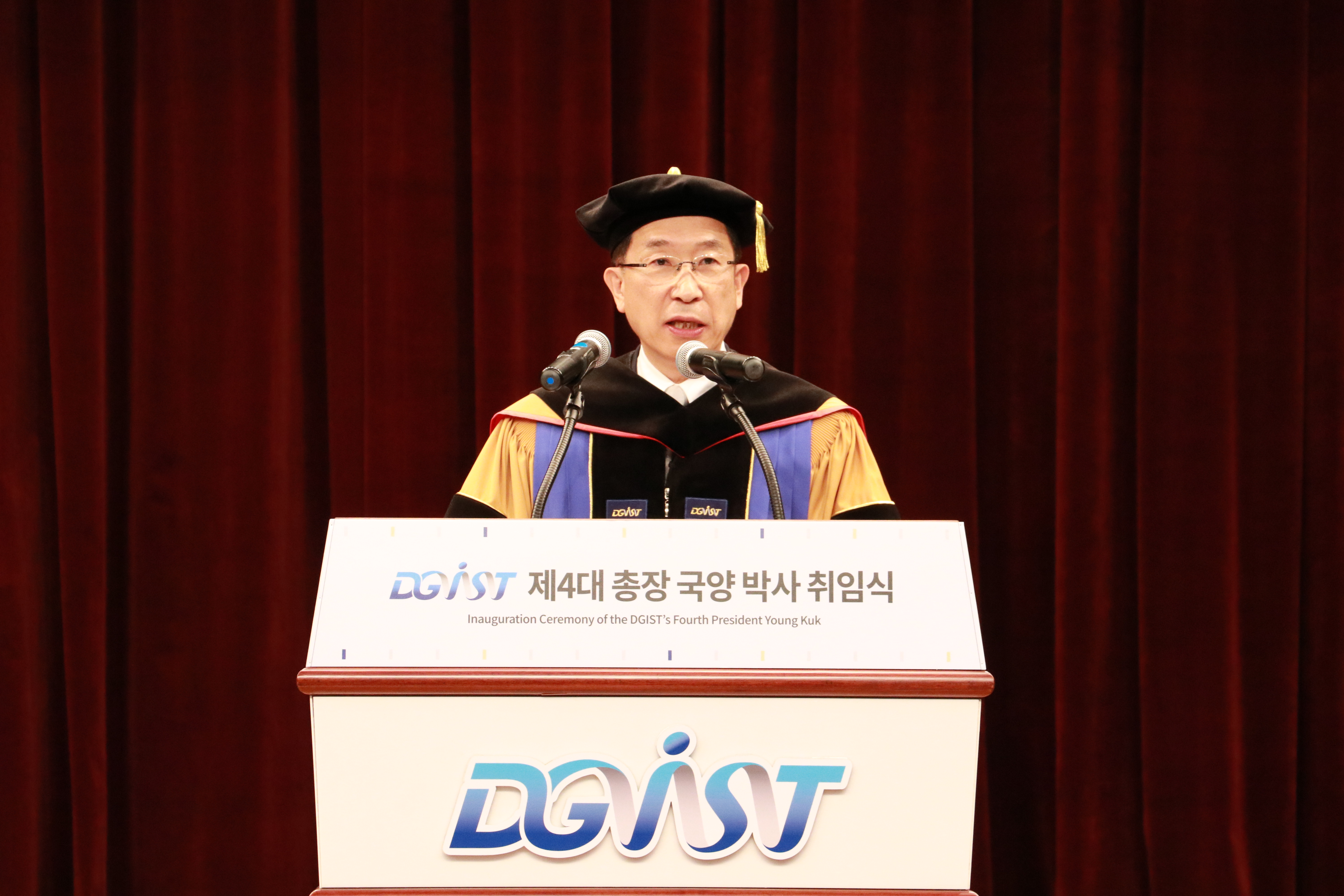 At 11am on Thursday, April 25th, DGIST held the inauguration ceremony of its 4th President Young Kuk in the University Headquarters Convention Hall.

This inauguration ceremony was attended by 500 people including distinguished guests from the political and bureaucratic circles, academia, regional government offices, and DGIST faculty members and students including Director Hyeok-chae Ku from the Bureau of Future HR Policy in the Ministry of Science and ICT, Head of Dalseong Mun-oh Kim, and Chairman Jong-soo Woo.

In his inaugural address, President Young Kuk said that “The purpose of university is to contribute to the development of human society through students’ creative research and pursuit of truth beyond achieving performances or employment. As specified in the DGIST establishment laws and school rules, we will strive to make our university contribute to the knowledge progress as well as regional, national, and international society through creative and challenging convergence education and research.

Moreover, President Kuk suggested Freedom in the pursuit of knowledge, emphasis on creative research, and contribution to the development of regional and national economy as the ideal form of DGIST during the inauguration ceremony.

President Kuk said “The ideal institution of DGIST is not only to identify the science trends required by the era but also to perform academics and creative research that meet these trends. DGIST will do its best both as an educational and regional public institution to develop the School of Basic Sciences which represents convergence and lead regional growth through cooperation with Daegu and Gyeongbuk.”

Meanwhile, President Young Kuk who was appointed as the 4th President of DGIST received his bachelor and master’s degrees from Seoul National University Department of Physics and his Ph.D. from the Penn State University Graduate School. As a scientist who has focused on nano research for the last 40 years, he worked as a researcher at AT&T Bell Lab for 10 years and as a professor at Seoul National University for 27 years. From 2014, he has also been the Chairman of Samsung Science & Technology Foundation; he was selected through the 65th DGIST board of directors meeting on Tuesday, March 26 and was elected on April 1 through the final approval by the Ministry of Science and ICT and the Ministry of Education.